Home EDITOR'S PICK Love in The Age of Intolerance: A Story From Dubai That Restores...
Facebook
Twitter

In the age of intolerance where humanity seems to be divided by border and religion, a number Muslim professionals of India went out of their way to help Pakistani and Hindu Indians workers abandoned in a foreign land.

Dubai (TwoCircles.net): Gulf countries provide largest remittance to India, they are the source of success and employment of many people in the Indian subcontinent. Among the successes there are also frequent stories of workers getting duped by agents or cheated by their employers. The stories of 23 workers- 12 from Pakistan and 11 from India – looked like just another story of poor workers caught in an unfortunate situation except that the generosity of a group of NRIs restored their faith in the humanity.

The group of construction workers was abandoned by their company Qasr-Al-Ameer. The owner apparently ran away leaving behind unpaid salaries since September.

“The living conditions worsened. We had to chop wood to cook food as there was no electricity or water,” informed Indian national Bhuneshvar Misra.

Faced with depleting ration and no water and electricity supply at the camp, they decided to move out. The workers came to Dubai in their bus which was also their only shelter. Bus driver and Pakistani national, Inayatullah Khan, sometimes just drove through nights. They soon ran out of food and water.

This was the time when Girish Pant, a social worker based in UAE, came in contact with them (December 10th) and started coordinating with their employer and relevant authorities, and arranged food for them for more than a week. He contacted other people for help. Journalist Mazhar Farouqi of Gulf News, who’s also the founder of Aaghaz Foundation (an India based NGO helping under-privileged drop out students get education funds to continue their studies), was one such individual. That proved to be the turning point in the story!

Yasmin Khan got in touch with the Indian and Pakistani consulates to expedite matters and also brought workers’ plight to Dar Al Ber Society, which kindly offered three meals a day for the laborers till their stay in Dubai. By this time many Aghaaz members were wholeheartedly and selflessly working for the cause. 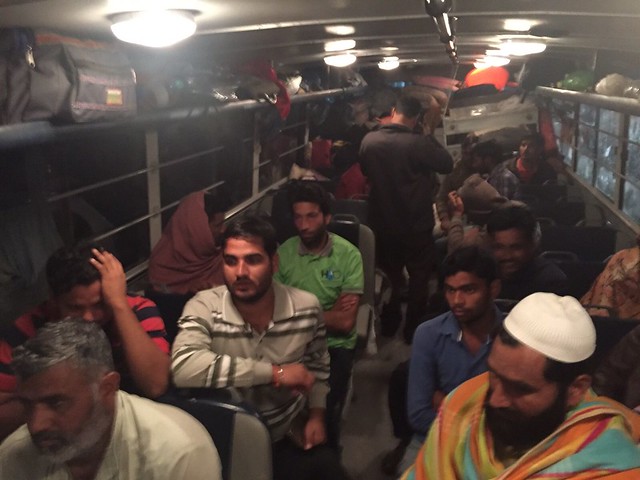 The same day PRO of the company also came forward to solve the matter immediately. Within two hours the PRO handed over their passports. In the evening, workers were taken to the Gurudwara in Jabal Ali for dinner. Six of the workers were quiet sick, so, arrangements were made by Yasmin khan to bring one medically equipped bus with three doctors from Aster Medical Clinic to the area outside the Gurudwara. The doctors there examined the labourers and provided them free medication.

That was to be their last night in the bus, Businessman Mashkoor Hasan provided them accommodation in Sharjah along with food and transportation.

The next day, a personal tragedy struck one of the worker- Dharmendra Nishad. He heard the news that his father passed away. “My father was keeping ill for some time and his conditioned worsened lately,” said Dharmendra.

Aghaaz members also tried to lift up the spirits of the workers. RJ Aftab entertained them at the camp with his performances. “We never laughed this much before, said Bhuvenshwar Mishra of Deoria, Uttar Pradesh after RJ Aftab had them in splits.

Rashid Ghufran, Farhat Ali Khan, Inam Abidi, Nadeem Hussain, Mairaj Ali and Imtiyaz Ahmad were the other members who were involved in the relief efforts almost on a daily basis. Their efforts finally bore fruits and the good news for the workers came soon. To celebrate the event an all vegetarian dinner (keeping the eating preference of the majority) was organised by the Aghaaaz team for the workers. They were also given some cash and goodies for their families back home.

Yasmin Khan said, “It is an honour for me that Mazhar Farooqui contacted me for this work, and it is a privilege to be working with such a dedicated team of people with big heart. Additionally, I was supported by the Indian consulate all along. I hope they return to their families back home soon.” The ordeal seems to be over as the workers are to fly back home tonight.

The workers are planned to fly back to India on the intervening night between Prophet Mohammad’s birthday and Christmas with a message for the humanity.

“I’ll certainly tell all my friends and acquaintances back home about all these good people. They helped us as good human beings,” said Mishra.

Million of Indians come to the Middle East every year in search for a better future. Many have indeed found success. But for 11 individuals from UP and Bihar the experience turned sour and could have been worse had it not been for some kind-hearted NRIs. A group of mostly Muslim professionals joined hands to help through night and day their Hindu brothers in a foreign land. This is truly a story of hope in trying times.